A property that was homesteaded almost 150 years ago is being recognized this year for its historic structures. 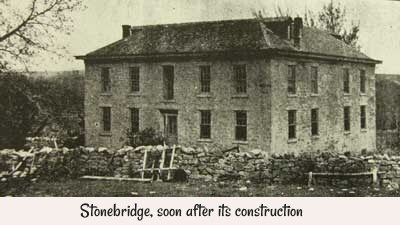 Bill Hogue said it is his habit to research properties when he purchases them, and the historic 1,265-acre ranch southeast of Alma was no exception.

“When I buy things, I try to get the abstract so I can go back and see who owned it,” he said.

He said this is, in part, a hobby of sorts.

“I guess that’s a good thing to call it,” he said.

Thus, he has compiled a fair amount of information on the old properties and their previous owners.

“They (the Kuenzlis) came over and homesteaded that,” he said. “They started that on 160 acres – that was their homestead in 1859.”

He said within the next few years the original Stonebridge house was built.

“In the early 1860s, they built this three-story stone house with two stone cellar caves in them,” Hogue said. “That’s where they lived and had the five kids – two girls and three boys.”

From there, the family continued to add to the land.

Emily, the oldest daughter in the Kuenzli family, married John Schwalm and the family’s total property holdings grew to the point that they had between 5,000 and 6,000 acres by 1900.

Hogue said that 100 years took its toll on the home.

“When we got it in 2004, they had let that roof deteriorate,” he said. “It was getting in pretty bad shape so that was what we started with.”

In addition, Kathy added that the house had sustained structural damage.

“The roof and second story were completely gone and the walls of its landmark twin arched cellars were caving in,” she said. “Giant tree roots had forced three of the exterior walls to heave a crack, leaving gaping cracks open to further destruction from the elements.”

Bill Hogue said the first goal was to simply stabilize the structure.

“Basically, we want to just get it so that it’s not totally finished, but structurally so it can be preserved,” he said. “We really don’t plan on using it as a house or anything. We’ve pretty well got it structurally.”

He said his experience building homes came in handy in making repairs.

“The first thing we did was cut the trees down – get them out of there so they keep from growing roots in it,” Hogue said. “Then we went to work on the walls, chipping up the mortar that had deteriorated.”

The roof presented more of a challenge.

“The top of it some places had caved in down six to eight inches lower than others,” he said. “We got that leveled up so we could set a roof on it.”

And, the work continued.

“This summer we went in, the wall’s about 18-inches thick, we went in and replaced some parts of the wall that had caved in,” he said.

“Word got out that we were kind of preserving that thing and everybody got interested and wanted to go see it,” Hogue said. “Alan Winkler at the historical society got word of what we were doing. They’ve been after us.”

Hogue said the historical society encouraged them to put the structures on the historical tour last year, but he didn’t think they were ready at that time. As a result, the homes will be on this year’s tour.

Both Hogues expressed excitement about owning this particular plot of land.

“We’re the first one that isn’t a member of the family that’s owned this thing,” Hogue said.

He said he knew some of the family, and was familiar with Pearl Redmon, great-granddaughter of the Kuenzlis and was aware that she and her husband had died. When he heard there were plans to sell the property he was asked if he was interested. 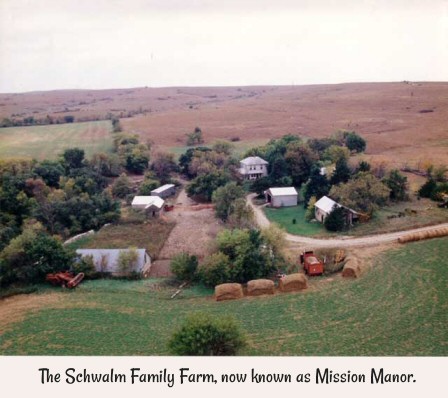 Upon purchasing the property, he also purchased other buildings, including a little rock building they suspect was a summer kitchen, the home owned by daughter Emily and a second little stone house where Emily and John lived while building their home.

He said they did restoration on these buildings as well.

“(The summer kitchen) was a stone building,” he said. “It was in the same condition as the other. We restored it too.”

He said he also has worked on the little stone house.

“We’ve done the same thing to those, too,” he said.

He added that Kathy has done a lot of cosmetic work on the buildings as well, by adding little touches to give the structures a feel of their original atmosphere.

The property is about eight miles southeast of Alma, KS.